I was pleased to have been invited to speak at the Welfare Imaginaries first seminar in a series last month. It’s great that the organisers knew about Shoddy and wanted to include a disability narrative in this project, which examines how ideas of welfare state have been constructed over time.

Here are the notes of my presentation – a bit of a long post.

A couple of years ago, I coordinated a disability arts project in Leeds. Amongst other things, the project was a means to hone in on different periods which were significant to disabled people’s relationships to welfare.
This project was called Shoddy.
Shoddy is the name for new cloth created from woollen waste and recycled fabric. This original meaning is now largely unknown, and the word has come to mean of inferior quality, shabby, broken-down.
This was the starting point for a project led by and featuring disabled textile artists working with woollen yarns and fabrics, or recycled and reused textile materials. The project centred on an exhibition in Leeds in April 2016, with further exhibitions in Batley and Leeds.
(The slides show some of the artworks that were in the exhibition.
The lining of Lesley Illingworth’s Storytelling Coat, in the foreground here, is covered with names – MPs’ names partnered with the name of a disabled person from Calum’s List – which was a memorial to deceased benefit claimants, where welfare reform was allegedly a contributory factor in their deaths).
Shoddy challenged assumptions that disabled people – that our work, and our-selves, are inferior, broken-down, or second-rate.
And this was, of course, against the enduring background of cuts to welfare benefits, a raft of massive cuts to public services, including social care services, that are disproportionately affecting disabled people, and a climate of demonising those who receive benefits or other support.
The project therefore described the current government’s treatment of disabled people as “Shoddy” – although that, of course, is a woefully inadequate word for the attacks on people’s right to live with dignity, without fear of their independence being taken away.

Shoddy is a word with multiple definitions and uses, and that was reflected in this disability arts project. Shoddy aimed to link these historical and contemporary meanings, focusing on disabled people’s lives and concerns.
And the idea was to get people talking and thinking about disabled people and to contribute to making disabled people and disability rights more visible and to spark discussions. Looking back through history supported that.
The process for producing Shoddy was invented in 1813, on the very border between Morley, which is now part of Leeds, and Batley. Shoddy production was consequently widespread in West Yorkshire.
So we had this connection to history through the project, most directly to the industrial revolution and the textile industry.
The project gave the opportunity to link with several historical moments, to draw parallels between disabled people’s lives now and then.
As well as the Industrial Revolution, Shoddy looked back to the post-war period of the 1940s and then to the 1990s. So, I’ll talk about these in chronological order.

It seems a bit of a cliché to compare the current welfare system to the workhouse, but unfortunately, the comparisons stand.
The drive to save money on welfare and support, to supposedly incentivise – or force – disabled people to get a job, despite a lack of suitable work and the prejudices of employers, is a clear echo of the 19th century workhouse principle of “less eligibility”. Conditions in the workhouse were designed to deter people from seeking help.
So now we have the Work Capability Assessment, carried out by Maximus, and before that, of course, Atos. These corporations are the equivalent of the Relieving Officers, set up under the 1834 Poor Law, determining how much – or little – support people are / were entitled to, consigning thousands to stringent work-related activity or destitution. And this is when the idea of the deserving and undeserving poor took hold – prevalent today and stoked by government policies and rhetoric.

Jumping to 1940s…
I and one of the other artists were really excited to exhibit Shoddy in Batley Art Gallery – Batley being the birthplace or certainly the epicentre of shoddy manufacturing. The exhibition actually coincided with Batley Vintage Day at the end of May 2016. This is one of a number of events round the country that celebrates the 1940s. (I don’t know if you’ve come across them?)
Rather than get involved in wartime nostalgia, uniforms, swing dancing and all that, this presented an opportunity to look back at the post-war period, a time of significant change for disabled people and society.
As Shoddy protested the dismantling of the welfare state and huge cuts to public services, it was timely to look back to the birth of the welfare state and the NHS, when the collective mood was very different – to build a better future for all.
I’m not going to go into the detail of all the reforms and legislation that were introduced, as other speakers have got that covered. 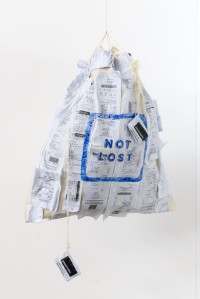 (Not Lost by Mow is her response to collecting and sending financial information to the benefits centre, only for it to be mysteriously lost).
Because my focus is on disability, I will mention the Disabled Persons (Employment) Act of 1944. This was the first piece of legislation designed for disabled people as a group.  As well as trying to get employers to employ disabled people, this Act made provision for a range of rehabilitation services and vocational training courses. It brought in the 3% quota for larger employers to take on disabled people and a set of occupations that were reserved for disabled people such as lift and car park attendants.
However, it wasn’t enforced and employers who failed to meet the recruitment quota were rarely prosecuted, so it only benefitted a small number of disabled people. Some people got jobs who otherwise might not have. But it didn’t do anything about discrimination.
Legislation that followed (the Disability Discrimination Act 1995, which became part of the Equality Act in 2010) abolished the quota and registration system, replacing it with another unenforced and unenforceable concept of “reasonable adjustments”.  Based on a requirement to prove that you have a “disability” rather than proving you have been discriminated against as a disabled person, this law was far from what the disabled people’s movement had been fighting for.
Back to the 1940s. The concern and wish to “do something” for disabled people was a double-edged sword. It led to a more paternalistic approach towards disabled people, which continues t9 this day. The huge charities for disabled people which still dominate, including Mencap, Scope, Leonard Cheshire, Mind, and so on, were founded in the 1940’s or early 1950’s by concerned carers and family members. These institutions, perhaps born of good intentions, became a major stumbling block to disabled people’s equality and independence, by their very definition positioning disabled people as dependent and needy.
Which brings us to the 1990s … 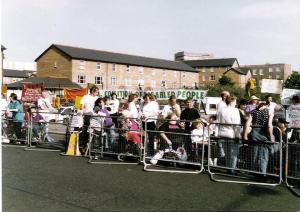 ‘Rights Not Charity’ had been a rallying cry of the disabled people’s movement for decades. But it was in the 80s and 90s that opposition to the disability charities, who were stifling disabled people’s rights rather than furthering them, really kicked off.
There had been a couple of actions in Leeds against the BBC’s Children in Need programmes, broadcast from Leeds to cover the Yorkshire region’s activities. Through this, our Leeds group met up with other disabled people from around the country who were sick of the big charities supposedly representing disabled people. A group of us attended the Block Telethon demo in London in 92 (pictured) which was huge, hundreds of people, it was a big party. And it was a chance to directly confront those who thought they were doing good, including Chris Tarrant and a host of other stars.
Block Telethon was particularly important, I think, because it really shocked people – the fact that disabled people were angry rather than grateful just blew people’s minds. Biting the hand that feeds.
And it did lead to reforms in some of those big charities, like involving more disabled people on the board, or giving a few more disabled people jobs. But it was all too little, too late and they never relinquished their control.
The big charities are still there, they might have changed, but they dominate the debate and discussion around disability rights, they’re the ones with the ear of the government.
Meanwhile, organisations OF disabled people are struggling to survive, if they haven’t already closed through funding cuts and competition with bigger organisations.
Block Telethon was also important because it led to the formation of DAN, the Disabled People’s Direct Action Network that organised lots of high profile actions, with an effective campaign about inaccessible public transport. DAN’s actions and visibility played a large part in the introduction of the Disability Discrimination Act.

DAN didn’t just target public transport though, welfare reform was also on the agenda.
In 1998, in partnership with ACT UP, the HIV/ AIDs direct action group, we occupied the DHSS headquarters in Leeds – the Dept of Health & Social Security as it was then, predecessor of the DWP. We were protesting the Benefits Integrity Project (BIP). Set up by the Tories right at the end of their government, but then implemented by Tony Blair’s Labour government, this aimed to root out benefit fraud by reviewing the claims of over 400,000 people on Disability Living Allowance.
It’s really interesting to read back over the leaflets and press releases from that campaign, because they could have been written today:
• BIP was described as a tax on disabled people, who are being labelled as scroungers
• 20% of people had their benefits stopped altogether
• Interviewing officers received only 4 days’ training
• Many terminally ill and ‘severely disabled’ people were included in the review.
• And following BIP, the Benefits Medical Agency was privatised.
The Leeds demo followed a DAN action outside Downing Street where protestors carried begging bowls, which were, they said, “symbolising that the government threats would bring back this quaint, Victorian industry for disabled people”.
These begging bowls, by the way, were full of red paint which was thrown around liberally at the Downing Street entrance.
BIP was scrapped later in 1998, after 2,000 people had been through its assessment. Some had benefits reinstated, but many did not.

Now DPAC – Disabled People Against Cuts – is leading the fight against austerity measures, public funding and benefits cuts. They run campaigns, do research and carry out protests and direct action.
At Shoddy’s exhibition launch we raised money for DPAC, and I share their website on this final slide, so that you can find out more about them and support them if you wish.
https://dpac.uk.net/